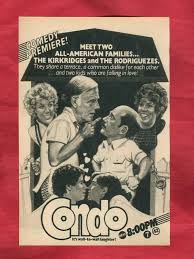 “You are the decade expert.”  Nick said.

“I see, Professor Cultural Historian.  And pray tell, what are some of those?”  Nick asked.

“I’ll tell you one that always caught my eye.”  Bob said.  “That show in the 80’s with McLean Stevenson, Condo.”

“Never heard of it.”

“I’m not surprised about that.  It was one of the casualties of greedy corporate executives.  It got cancelled after one season.”  Bob said.

“I can tell you this, it had an iconic classic actor in McLean Stevenson.  You watch that show, his talent shines.  They simply didn’t know what to do with all that comedic genius.” Bob said.

“He was in MASH for a while right?”  Nick asked.

“Really?”  Nick said “That’s a surprise.  It panders to the far left.  Think you would love it.”

“Bad TV.”  Bob insisted “If it wasn’t for McLean Stevenson and maybe Larry Linville, it would have flopped long before it did.  They carried that show from a pure comedy standpoint.”

“Not Alan Alda, the star?” Nick shook his head in disbelief.

“How about the one that wore dresses?”  Nick asked.

“Jamie Farr?  Forgot about him.  I’m on the floor every time he comes on camera.”  Bob smiled.

“You know, if Jamie Farr, McLean Stevenson and Polly Holliday had ever appeared on screen together, they would have just stopped making movies.  The camera couldn’t hold all of that astounding talent.”  Nick said.

“Go on, laugh it up.”  Bob said “It’s you who doesn’t understand the sophisticated mind of the master actor and comedian.”

Academy of the Heart And Mind

Welcome to a world of emerging writers.

Done with Religion ... Not Done with God

Most would rather endure comfortable bondage, than experience uneasy freedom

The Blog of Milt Rodriguez

Christ and His Church

There's comedic gold behind every painful experience. Here are mine.

Recommendations from a Lifetime of Listening

musings of a garlic bagel
walkcheerfullyblog

Where the American South meets the world.

Tales of humour, whimsy and courgettes

You will always be fond of me. I represent to you all the sins you have never had the courage to commit. - Oscar Wilde