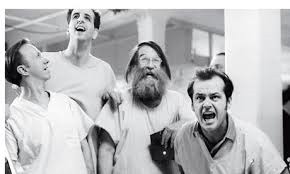 “How many times do you suppose you two have broken up over the years?”  Nick asked.

“Twenty.  Thirty.  Who counts?”  Bob smiled.  “Anyway, I always part company with the ladies on good terms.  You know what I always say:  Do them and forget them.  But be nice when you forget them because you might want to do them again.”

“Great motto to live by Bob.  The kind of motto that causes multiple marriages and a lot of P.O.’ed ex girlfriends.”  Nick said.

“Funny but they keep right on coming now don’t they?  The next woman takes me out is gonna light up like a pinball machine, and pay off in silver dollars.”  Bob countered.

Nick turned to Rick.  “I told you.   He has a book or something, internet, whatever.  He studies this stuff.”

“You two are made for each other.”  Rick added.

Words, Images and You

A Journal of Brief Literature

A Literary Journal for Families

New Writing Engaging with the Sacred

"I will remove from you your heart of stone and give you a heart of flesh" Ezekiel 36:26

A literary journal of safety and danger

Literature, Criticism, and Journalism from the Heartland

"Let us examine our ways and test them, and let us return to the Lord" (Lamentations 3.40)

The Literary World of Sylvia Hubbard